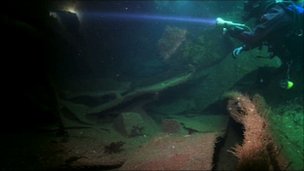 The seabed off the Cornish coast seems to have almost recovered after an oil tanker spill in 1967, writes Paul Rose, expert diver and presenter on BBC programme Britain's Secret Seas.

The Torrey Canyon is the largest shipwreck in British waters, and as she sits a long way from shore amongst the same hazardous rocks that she ran on to, its not the easiest wreck to get to.

On Saturday, 18 March 1967, she ran aground carrying over 119,000 tonnes of crude oil, which gushed out into the pristine Atlantic waters.

She had run into one of the infamous Seven Stones rock pinnacles, which lay 15 nautical miles west from Lands End and seven nautical miles from the Scilly Isles, which make it a hard wreck to reach.

We believe our team is the first to film the wreck, which is in an area often hit by storms. As I rolled off the boat into heaving waters caused by constant huge Atlantic swells, I entered a great swaying underwater forest of kelp.

The water was gin clear and the huge kelp fronds were in a mad rhythm of bending, then standing straight up, swinging and heaving to the forces of the sea.

It was a great, vibrant start to the dive, but it looked to me as if we had missed the Torrey Canyon completely, as after all she is said to be well broken up over 2 sq km of the seabed.

I then realised that I was on the wreck - the huge hull plates have so much life on them that they look just like rocks or the bottom. The sea has reclaimed the wreck and it is teeming with life.

Things started to make sense and as I swam along the steel plates I joined large schools of wrasse, pollock and pouting.

Some of the schools were moving purposefully along the wreck sides and others had relaxed into shoals underneath and inside the wreckage.