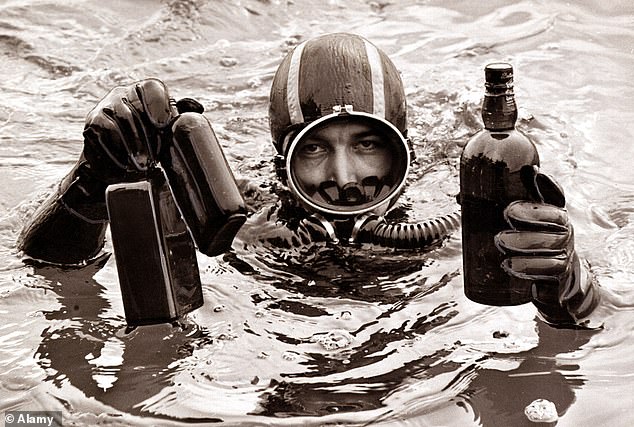 A rare bottle of whisky salvaged by The Mail on Sunday from a shipwreck that inspired the film Whisky Galore! has fetched a record £12,925. The sum is thought to be the highest ever paid at auction for a single bottle of Scotch from the wreck of the SS Politician, which ran aground in 1941 near the island of Eriskay in the Outer Hebrides.

The blended whisky was recovered during a dive sponsored by the MoS in 1987, and offered as the first prize in a poem competition won by Donald McLaren of Dundee, who passed away aged 78 in 2016.

Mr McLaren’s daughter, Nicola Hastie, offered the bottle in The Grand Whisky Auction’s online sale, where it attracted global interest, and a bidding war saw the price soar to double its £5,000-£6,000 estimate.

Mrs Hastie, 57, who will share the proceeds with brother Andrew, said: ‘It was amazing.

Dad was an avid reader of The Mail on Sunday and read it from cover to cover every week. ‘He was delighted to win such an historic bottle thanks to his poem, but he would be very happy with this outcome.

It feels like Dad’s still looking after us. ‘I don’t know who bought the whisky, but I would love to think that it might go on display for people to enjoy.’

Of her plans for her share of the proceeds, she added: ‘I’m going to visit Rothesay, where my dad grew up, for the first time, to see where he lived and went to school.

‘Dad and I enjoyed art so I’ll look for a painting of Rothesay to hang next to his framed poem as a reminder of him. Also, I’ve never seen Whisky Galore! so I’ll buy it on DVD.’

The 8,000-ton SS Politician was bound for Kingston in Jamaica and New Orleans when it ran aground.