The lake of the nazi gold 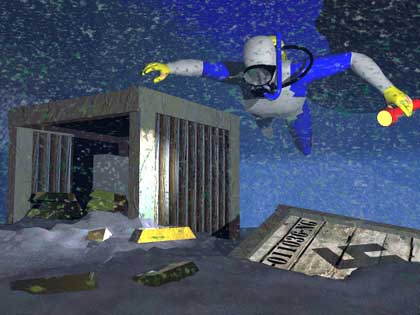 In the final days of the Third Reich, some Nazi officers loaded gold, documents and counterfeit British currency (pounds) into army trucks in Berlin, Germany, and drove south toward the Alps.

Some Nazi remnants -- a gold urn, personal seals, etc. -- have since been found in Bavarian and Austrian lakes such as Walchensee (Bavaria) and Altausee (Austria).

Yet most of the Nazi's gold treasure is still missing.

Many people believe that it was dumped into Lake Toplitz at the time of the downfall of the Nazi empire.

The story of lake Toplitz has inspired many authors and filmmakers as well as treasure hunters who dived in the lake in search of the missing gold.

The Nazis had planned to destabilize the British economy by dropping counterfeit British pounds from airplanes over the country -- a plan they never carried out.

Some of this counterfeit currency has been found by diving expeditions in Lake Toplitz.

Other lakes in Bavaria and Austria are supposed to contain also Nazi gold treasures, yet nobody knows the details.

Nor does anybody know what happened to the Nazis who transported the gold and secret documents.