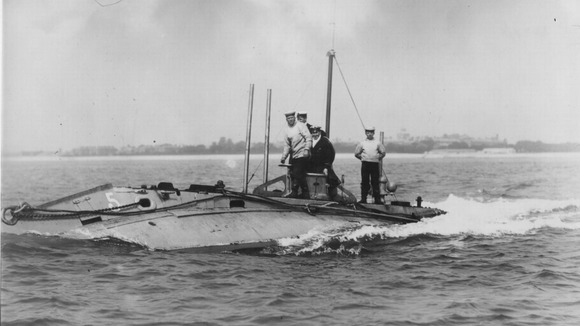 Yesterday, the Nautical Archaeology Society and the Tunbridge Wells Sub Aqua Club have been marking the anniversary of the loss of the Holland 5 submarine - the Royal Navy's oldest submarine wreck - with a dive 100 years to the day after its loss.

Hundreds of years of maritime activity, two World Wars and numerous seafaring accidents have seen the seas and shores around the south coast become steeped in legend and undiscovered pockets of history.

One piece of naval history that remained undiscovered until 1995 was the Holland 5 submarine.

However, the Holland series of submarines rapidly became obsolete and on the August 8 1912 she was being towed to Sheerness for decommissioning and sank in her current position off the coast of Eastbourne, six miles southeast of the Royal Sovereign Lighthouse.

There was no loss of life when the Holland 5 sank, just a loss of the most intact example of the Holland series of submarines.

The cause of the sinking was believed to be as a result of flooding through a torpedo hatch and she lay undiscovered for almost a century.