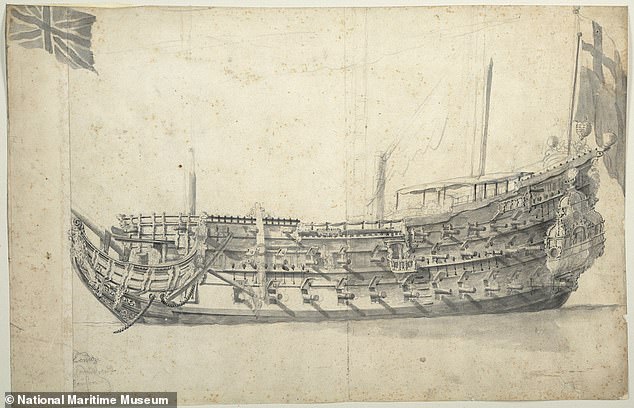 Academics are creating a digital map of ‘The London‘, an ill-fated 17th century warship, based on remains that have been submerged for 350 years. The impressive 120-foot ship mysteriously exploded in the Thames Estuary near Southend Pier in Essex and sank on March 7, 1665, killing 300 people.

Divers have been investigating the remains of the vessel, which originally had 76 guns and was one of the most important ships in the Commonwealth Navy.

The London was one of only three completed wooden second rate ‘large ships’ that were built between 1600 and 1642 – and is the only one whose wreck still survives.

It formed part of the fleet that brought Charles II back from the Netherlands in 1660 to restore him to the throne, to end the anarchy which followed the death of Oliver Cromwell in 1658 and his son Richard Cromwell taking power.

But it blew up when gunpowder on board caught fire as the ship was en-route to collect supplies after being mobilised to take part in the Second Anglo-Dutch War of 1665 to 1667.