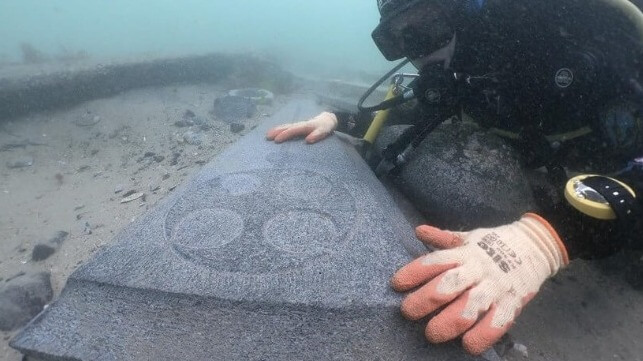 A 13th century medieval shipwreck has been granted the highest level of government protection in the UK in hopes of protecting a national historic treasure.

The Mortar Wreck, which was discovered in Poole Bay in Dorset in 2020, is among three shipwrecks that have been given government protection status by the Secretary of State for Culture based on the advice of Historic England.

The remains of the medieval ship were discovered by diver Trevor Small, who has operated diving charters for the past 30 years. Tree ring dating of the wreck indicates that the timbers used to construct the hull are from Irish oak trees felled between 1242-1265, during the reign of King Henry III.

The survival of 13th-century vessels is extremely rare, and prior to the discovery, there were no known wrecks of seagoing ships from the 11th to the 14th century in English waters.

“Very few 750-year-old ships remain for us to be able to see today and so we are extremely lucky to have discovered an example as rare as this and in such good condition. A combination of low-oxygenated water, sand and stones has helped preserve one side of the ship and the hull is clearly visible,” said Tom Cousins, Maritime Archaeologist at Bournemouth University.

The ship was carrying two gothic gravestones carved of Purbeck marble, a limestone quarried locally in Dorset. Other finds include a large cauldron for cooking soup, a smaller cauldron, which would have once had a long handle for heating water, and mugs covered in concretion, the hard solid mass that forms over underwater objects over time.