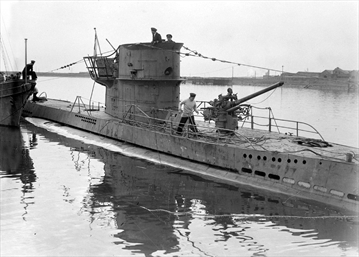 By Richard J. Brennan - The Spec

Brian Corbin says it might sound far-fetched but he’s 100 per cent sure there is a German U-boat lying on the bottom of Labrador’s Churchill River more than 200 kilometres from the coast.

Rumours of a World War II German submarine at the bottom of the river have been around for years, but a grainy sonar image seems to show the outline of the type of sub that terrorized the North Atlantic during World War II.

Corbin, 50, a diver from Happy Valley Goose Bay in Labrador, was among several people using side scan sonar technology searching the river bottom for three men lost over Muskrat Falls in 2010 but it was only three weeks ago they made what they believe to be an historic discovery.

“Our focus was finding bodies . . . but low and behold we found something that sort of resembles a submarine,” Corbin told the Star Thursday.

It was after Corbin heard that other people were searching for “the so-called submarine” that he decided to pore over the sonar images since his group had spent three weeks combing the area near the falls.

“I’m 100 per cent (convinced) . . . it does resemble a conning tower, snorkel vents for the generators for charging the batteries and the cables are there that go to the conning tower . . . it’s a very good sonar image,” he said.

Corbin said he has registered with Transport Canada’s Receiver of Wreck, who acts as the custodian of found and recovered wrecks, and he’s eager to get back to the site, about one kilometre from Muskrat Falls.