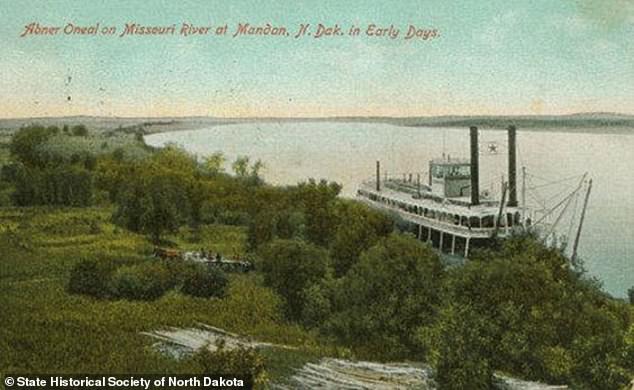 A nearly 130-year-old shipwreck has been revealed in the Missouri River as the region experiences a severe drought and river levels have dropped more than two feet.

The Abner O'Neal was wrecked in 1892 just north of Bismarck, North Dakota, while bringing 9,000 bushels of wheat from Washburn to Mandan, KYFR-TV reports.

According to Fox 4, nearly one third, or 31.9 percent of land area is experiencing a drought in Missouri. That's up from March, when just six percent of the state was dry, which started to cause an issue for crops.

More than 1.8 million people, or just over 30 percent of the state's population, are affected. In April, the US Drought Monitor said that nearly 50 percent of the U.S. were experiencing severe drought conditions. Since she wrecked, the steamboat has been submerged in the Missouri River, but history buffs are getting their first look at the ancient wreck.

She was built in 1884 in Freedom, Pennsylvania, according to the State Historical Society of North Dakota. She is named after Capt. Abner O'Neal, a well-known shipping figure from the 1870s Steubenville/Wheeling steamboat industry.

She operated for a number of years successfully, bringing both freight and passengers up and down the region.

'I thought that would be a fantastic thing to see,' kayaker Nyk Edinger told the news outlet. 'It's pretty exciting being that close to it, seeing how it has maintained its shape,' he added. 'It's just amazing that it's still sitting right where it sunk.'