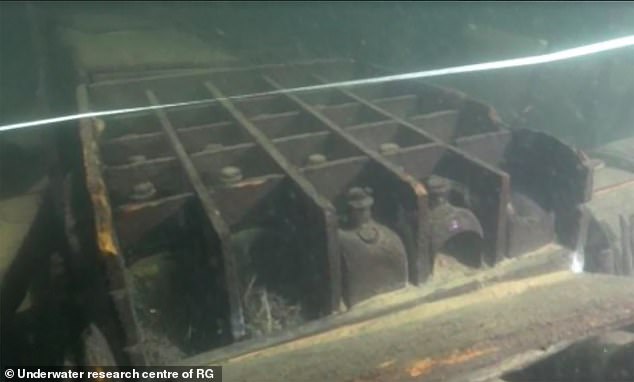 The wreck of an 18th century floating gin palace has been found in the Gulf of Finland. The vessel was spotted by Russia's Baltic naval fleet and has given up its secrets.

The boat - believed to be Dutch - was delivering hundreds of bottles of gin to Tsarist capital St Petersburg, seat of power of the Romanov emperors. Other small bottles contained perfumes or the ingredients for fragrances including eucalyptus and the essence of pine needles.

Some elaborate gin bottles appear to have a 'London' seal on them, though it still needs to be verified as genuine.

Roman Prokhorov, an underwater archaeologist with the Russian Geographical Society, said: 'These bottles are the most interesting. 'They were transported in wooden boxes. 'Obviously, they were not empty. 'There are bubbles of air in the glass, so they must have been hand-manufactured.'

The reason the ship sank, and the date it went down, near Moshchnyi island is so far unknown but Russian experts intend to solve the mystery of the floating gin palace. Little is left of the vessel but it is believed to be a Dutch tjalk - or barge - used to carry cargo.

Sadly, no surviving gin has been found at the wreck site. It is possible to determine what was transported in the vessels only by the smell and type of bottles, say reports. 'Most likely, the ship was sailing to St. Petersburg and was carrying bottles of alcohol on board,' said Prokhorov.

The vessel sank some 80 miles west of St Petersburg.