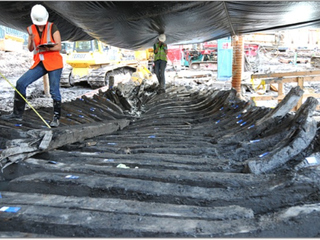 Archaeologists helping to excavate the World Trade Center site have uncovered a second piece of the more than 200-year-old ship that was discovered there last summer.

The find, made last Friday, came as workers began digging up the east side of the construction area, which once housed the World Trade Center complex.

"We were expecting there to be something there," said Michael Pappalardo, an archaeologist with engineering consultancy firm AKRF who was on hand for the unearthing. "But it was definitely exciting."

"Now no more of these remains are on the site," he added, explaining that the rest of the relevant area had already been excavated.

Archaeologists first noticed remnants of the ship — curved pieces of wood buried 25 feet below street level — last July and spent two weeks excavating the artifact, which turned out to be a 32-foot-long section of the boat's hull.

The piece that was found last Friday belongs to the very front of the ship, providing crucial clues as to its size, shape and, therefore, use, according to Pappalardo.

"It does give us a much better sense of the boat's original dimensions," the archaeologist, who now estimates that the ship was 50 feet long at its base and 60 feet long on the deck, explained.

It was still being stored at a facility in New York as of Thursday morning, but it will soon be reunited with the rest of the ship's remains at Texas A&M's Center for Maritime Archaeology and Conservation, Pappalardo said.

The artifacts will be saved there under stable conditions until the Port Authority decides what to do with them, according to Pappalardo. The authority might decide to undergo the lengthy process of preserving all of the remains — perhaps to be reconstructed later — or they might just decide to preserve some of the artifacts, the archaeologist explained.