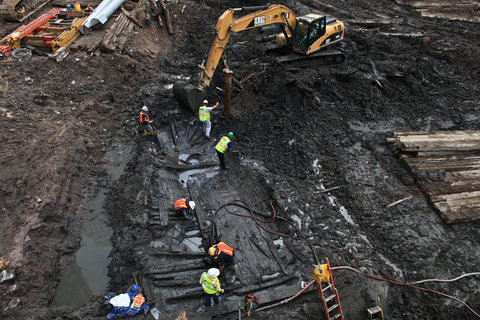 In the middle of tomorrow, a great ribbed ghost has emerged from a distant yesterday.

On Tuesday morning, workers excavating the site of the underground vehicle security center for the future World Trade Center hit a row of sturdy, upright wood timbers, regularly spaced, sticking out of a briny gray muck flecked with oyster shells.

Obviously, these were more than just remnants of the wooden cribbing used in the late 18th and early 19th centuries to extend the shoreline of Manhattan Island ever farther into the Hudson River. (Lower Manhattan real estate was a precious commodity even then.)

“They were so perfectly contoured that they were clearly part of a ship,” said A. Michael Pappalardo, an archaeologist with the firm AKRF, which is working for the Port Authority of New York and New Jersey to document historical material uncovered during construction.

By Wednesday, the outlines made it plain: a 30-foot length of a wood-hulled vessel had been discovered about 20 to 30 feet below street level on the World Trade Center site, the first such large-scale archaeological find along the Manhattan waterfront since 1982, when an 18th-century cargo ship came to light at 175 Water Street.

The area under excavation, between Liberty and Cedar Streets, had not been dug out for the original trade center. The vessel, presumably dating from the mid- to late 1700s, was evidently undisturbed more than 200 years.

News of the find spread quickly. Archaeologists and officials hurried to the site, not only because of the magnitude of the discovery but because construction work could not be interrupted and because the timber, no longer safe in its cocoon of ooze, began deteriorating as soon as it was exposed to air.

For that reason, Doug Mackey, the chief regional archaeologist for the New York State Historic Preservation Office, was grateful for the rainfall. “If the sun had been out,” he said, “the wood would already have started to fall apart.”

As other archaeologists scrambled with tape measures over what appeared to be the floor planks of the ship’s lowermost deck, Mr. Mackey said, “We’re trying to record it as quickly as possible and do the analysis later.” All around the skeletal hull, excavation for the security center proceeded, changing the muddy terrain every few minutes.

Romantics may conjure the picture of an elegant schooner passing in sight of the spire of Trinity Church. Professional archaeologists are much more reserved.