A brigantine beneath Washington street 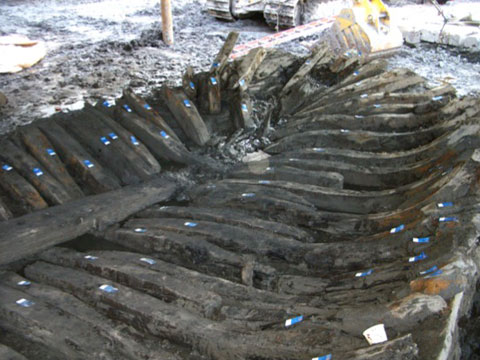 The 18th-century vessel unearthed two weeks ago in Lower Manhattan has begun to emerge from the mist of history.

She was most likely a brigantine; the two-masted workhorse of the coastal trade, ranging perhaps from New England (where she might have picked up lumber needed by an ever-growing New York City) as far south as Barbados (from which she would have carried sugar and molasses to feed a growing population).

“It’s one of the ships that helped build New York,” Warren Riess, an archaeologist specializing in marine history, told the board of the Lower Manhattan Development Corporation on Thursday.

Not that Dr. Riess would stoop to such an analogy, but it might be likened to an archaeologist of the future digging up an Econoline van rather than a rare Bugatti: nothing to fire the most romantic imaginings, but plenty to edify anyone who hoped to understand day-to-day life and commerce.

After the briefing, Dr. Riess hurried from the corporation office at 1 Liberty Plaza back to the excavation site at Washington and Liberty Streets. And Avi Schick, the chairman of the Lower Manhattan Development Corporation, said, “How fantastic it is that those who are building the New York of the 21st century were the ones who uncovered this artifact, that represents those who were building the New York of the 18th century.”

Dr. Riess based some of his preliminary conclusions — and he emphasized that any inferences were tentative — from the opportunity he and his colleagues have had to study the vessel as they disassembled it this week.

What prompted him to suppose the ship was a brigantine were its overall dimensions, he said. The front section of the ship, all that remains, is 32 feet long. Dr. Riess said further investigation might disclose that the vessel was a small three-masted ship or even a large schooner.

The disassembly should be finished Friday, Dr. Riess said. The forensic work will then shift to the Maryland Archaeological Conservation Laboratory.

What was a sodden mess two weeks ago looked more and more like a ship in recent days, with the exposure of the lowermost hull. This allowed Dr. Riess, of the Darling Marine Center at the University of Maine and archaeologists from the AKRF firm to see how honeycombed and worm-eaten the wood was, bolstering speculation that the ship’s sorry final lot was to be used as landfill around the turn of the 19th century.