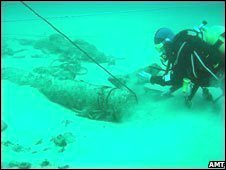 
A treasure trove of artefacts is being recovered from what experts describe as one of the most important maritime discoveries since the Mary Rose.

The raised haul includes a 2m-long (7ft) cannon, which will give archaeologists an insight into Elizabeth I's naval might. The wreck, discovered 30 years ago, is situated off the coast of Alderney.

Dr Mensun Bound, excavation leader and marine archaeologist from Oxford University, said: "This boat is really grade A in terms of archaeology - it is hard to find anything that really compares with it."