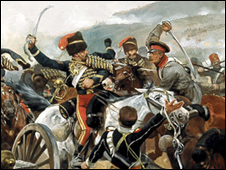 Ukrainian archaeologists say they have identified the remains of HMS Prince, a British naval vessel that sank off Balaclava during the Crimean War.

The sinking, with all 150 men on board, caused outrage not only for the human toll, but because thousands of badly needed winter uniforms were also lost. T

he ship had not been found since it sank during a storm in November 1854. Other underwater expeditions have found parts of the ship, but it is the first positive identification.

According to Sergei Voronov, of the Ukrainian Academy of Sciences, and the leader of the expedition, explorers discovered a plate fragment from the captain's mess last summer.

After months of meticulous cleaning, the fragment revealed the name of the company which owned the Prince before it was hired by the Royal Navy: the General Screw Steam Shipping Company.