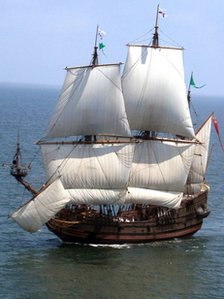 Skeletons recovered from the wreck of a King Henry VIII's warship the Mary Rose are being studied to discover more about life in the 1500s.

Swansea University sports scientists are hoping to find out more about the toll on the bodies of archers who had to pull heavy bows.

It is documented that archers were aboard the ship when it sank in 1545.

The wreck was raised from the Solent in 1982, containing thousands of medieval artefacts.

The ship, which is now based in Portsmouth where a new museum is being built to house her, also had 92 fairly complete skeletons of the crew of the Mary Rose.

Nick Owen, a sport and exercise bio mechanist from the College of Engineering at Swansea University, said: "This sample of human remains offers a unique opportunity to study activity related changes in human skeletons.

"It is documented that there was a company of archers aboard when the ship sank, at a time when many archers came from Wales and the south west of England.

"These archers had specialist techniques for making and using very powerful longbows. Some bows required a lifetime of training and immense strength as the archers had to pull weights up to 200lbs (about 90kg)."