Concerns over future of historic City of Adelaide ship 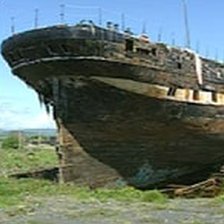 Heritage campaigners have called for an urgent rethink of plans to move the world's oldest surviving clipper to Australia.

The Sunderland-built City of Adelaide is due to be transported from Irvine, North Ayrshire, after an Australian group was named preferred bidder.

Rescue: The British Archaeological Trust said it had concerns over the funding to secure the clipper's future. Heritage Scotland said it believed the plans would mean a sustainable future.

The announcement in 2010 that Clipper Ship City of Adelaide (CSCoAL) Ltd was the preferred bidder came after a report commissioned by Historic Scotland into a number of options. The Sunderland City of Adelaide Recovery Fund (Scarf) has mounted a long-running campaign to bring the clipper back to the city where it was built.

Scarf chairman Peter Maddison is currently on board the vessel in protest at the plans to move it to Australia.

The archaeological trust's Rescue News editor Pam Irving challenged Historic Scotland to prove it had evaluated CSCoAL was financially capable of giving the ship a sustainable future and claimed it had not met a series of conditions.

She said she would like to see the full justification for the Australian team acquiring the ship to be made public.

She said: "CSCoAL is being put under pressure to deliver something they can't do. They have to be let off the hook.

"This is being rushed through to a deadline. That has to be scrapped."

Mrs Irving said her fear was the ship would be moved but then left in a situation similar to that in Scotland and would continue to deteriorate.

"I think we need to have one last go to see if we can't rise to the challenge of preserving the ship in the UK where it belongs", she said.