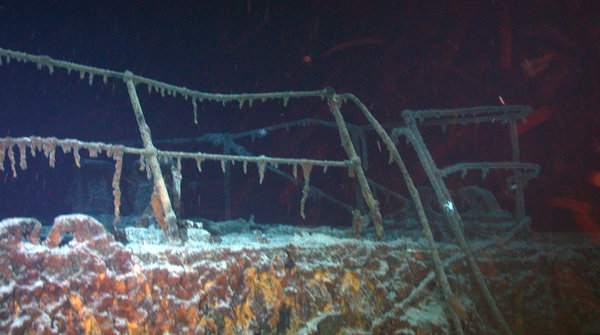 In 1941, a Nazi torpedo tore a hole in a British merchant ship carrying a fortune in silver to England from India.

The ship was part of a convoy headed for Liverpool, but it went down about 300 miles southwest of Ireland, disappearing in icy waters nearly three miles deep, deeper than the resting place of the Titanic.

Now, divers say they have found the wreck intact and they estimate its cargo at up to 240 tons of silver — a trove worth more than $200 million. They plan to recover it this spring.

The recovery, if successful, would be history’s deepest and largest retrieval of a precious cargo lost at sea and highlight the growing power of ocean technology, according to Odyssey Marine Exploration, the company that found the ship.

It is working under contract to the British government and says it verified the ship’s identity this month.

“We were fortunate to find the shipwreck sitting upright, with the holds open and easily accessible,” said Greg Stemm, chief executive of Odyssey, which is based in Tampa, Fla. “This should enable to us to unload cargo through the hatches, as would happen with a ship alongside a cargo terminal.”

Mr. Stemm added that a growing number of seafaring nations view cargo recovery as a creative way to increase revenues.

In such arrangements, private contractors put their own money at risk in costly expeditions and split any profits. Odyssey, for instance, is to get 80 percent of the silver’s value, and the British government 20 percent.

“It doesn’t cost taxpayers a dollar and accrues right to the bottom line,” Mr. Stemm said in an interview. “Governments are waking up to the potential.”

The ship carrying the valuable cargo was the S.S. Gairsoppa, a vessel of the British Indian Steam Navigation Company that was named for a spectacular waterfall near India’s western coast. In December 1940, it sailed from Calcutta laden with tea, iron and tons of silver.

In Freetown, Sierra Leone, the ship joined a military convoy headed to the British Isles and the contested waters of the North Atlantic.

The merchant steamship, 412 feet long, had 83 crewmen and two gunners on board, according to Lloyd’s of London, which compiles information about cargo lost in war.

High winds and a heavy swell soon forced the Gairsoppa to slow. As the weather deteriorated, the captain judged that the wallowing ship had insufficient coal to make it to Liverpool and broke from the convoy for Galway, in western Ireland.

Then, a highly decorated German U-boat captain, Ernst Mengersen, moved in for the attack. It was Feb. 17, 1941. A single torpedo ripped through the Gairsoppa’s hull and exploded, causing the forward mast to topple and the antenna to snap, cutting off the ship from the world. The U-boat opened fire as the Gairsoppa sank.

All 85 men died save one — the second officer, who survived 13 days in a lifeboat.

In recent years, the famous lost cargo of silver began to beckon as technological strides resulted in new generations of sturdy robots, lights, cameras and claws that can withstand the crushing pressure of the deep. At least one company tried, and failed, to find the shipwreck.

In early 2010, Odyssey won an exclusive contract from Britain’s Department for Transport to salvage the cargo. This past summer, it hired a Russian ship and performed a preliminary survey in international waters, finding what it considered solid clues.

And this month, the company took its main ship, the Odyssey Explorer, to investigate the area. Its tethered robot took three and a half hours to descend 2.9 miles through dark waters to the muddy seabed. Then came a eureka moment, when the robot found a gaping hole where the torpedo struck 70 years ago.

The hulk of the Gairsoppa was covered in rivulets of rust known as rusticles, which look like brownish icicles. But still standing bright and shiny on the deck was a waist-high compass used by the helmsmen.

There, small creatures with long tentacles had made themselves at home.

Odyssey says it confirmed the wreck’s identity from evidence including the number of holds, the anchor type, the scupper locations and red-and-black hull colors that matched the scheme used by the British Indian Steam Navigation Company.