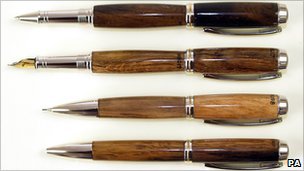 Pens made of wood found on the wreck site of the Mary Rose are being sold to raise funds for a new museum to house the Tudor warship.

The 200 pens were created using oak, beech, elm, boxwood and timber, all found on the seabed of the Solent close to the wreck of Henry VIII's flagship.

The wreck was discovered in the 1960s and in 1982 it was raised to the surface to be restored in dry dock in Portsmouth.

Each pen is marked with a unique number beginning with "MR", to signify it was recovered from the Mary Rose wreck site, although the wood is not believed to have come from the ship or its artefacts.

The idea has been supported by broadcaster and author Alan Titchmarsh, who lives in Hampshire and the Isle of Wight.