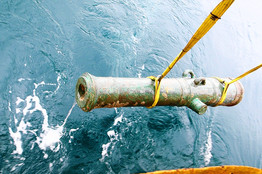 Spanish doubloons meant to fund wars, solid gold bars bound for Europe's royalty and bronze cannons that protected it all now sit scattered across the ocean floor from shipwrecks.

But in a new investment plan by Odyssey Marine Exploration Inc., those long-ago sunken treasures could soon be part of investor portfolios. The Tampa, Fla., company, whose work has been documented on the Discovery Channel and on the pages of National Geographic, plans to allow investors a chance to purchase a share of a treasure hunt and split the spoils.

Think of it as a romantic play on all-time highs in gold prices, by tracking Odyssey's ships online instead of tracking price ticks on charts. Or it is a chance to spice up a portfolio by putting down quarterly filings and looking at photos of wreckage.

Treasure hunting might become more intriguing if gold prices keep soaring. David Beahm, vice president of Blanchard & Co., a dealer of rare coins and gold, said rare coins trade higher than gold bullion. He doesn't recommend the investment, but did acknowledge, "As a child, you always want to find the buried treasure."

To be sure, when the end game is a ship that has been swallowed by the sea for centuries, the risk of coming up empty-handed is high.

"If you are going to be taking the risk anyway, why not go to a business that's potentially going to have high return?" said Chief Executive Greg Stemm.

"I could make the case that we've become the best people in the world at finding hard-to-find things at the bottom of the ocean."