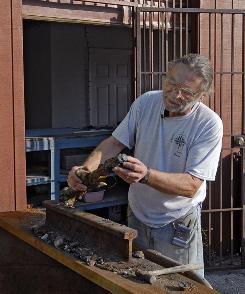 Bill Moore's hammer chips away at the rusty, seashell-encrusted coating of an unidentified pipe-shaped object.

The object could be a valuable artifact from a long-sunken Spanish treasure ship. Or it could be worthless plumbing from a modern-day salvage vessel.

"At this particular point, we really don't know what it is," says Moore, director of operations at Mel Fisher's Treasures museum in Sebastian, Fla.

As Moore removes the shells and other encrustations, he is careful to preserve what is left of the fragile object.

After 20 minutes of cautious hammer work, Moore's practiced eye recognizes an iron pin that was part of an old ship, probably one from a Spanish fleet that sunk off the coast of Florida during a hurricane in 1715.

Treasure from the sunken fleet doesn't always come in the form of gold and silver, he says.

Sometimes, discoveries include pieces of old ships, as well as weapons such as cannons and guns, made up of metals and wood.