Zeroing in on what caused Civil War submarine's sinking 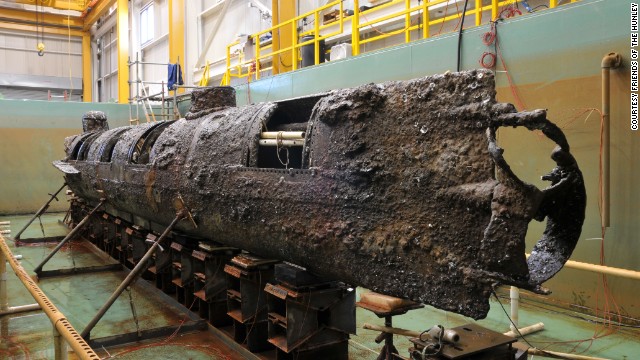 Born and built amid gray-cloaked secrecy during the American Civil War, the H.L. Hunley -- the first submarine to sink an enemy ship -- has held tight to its murky mysteries.

The 150th anniversary of the Hunley's daring and dangerous raid will be marked this weekend and Monday, but the overarching question remains: What caused the submarine and its eight-member crew to slip to the bottom of the sea on the moonlit evening of February 17, 1864, after it signaled to shore a success that changed naval warfare.

The Hunley, housed at a laboratory in North Charleston, South Carolina, has yielded its secrets slowly and sparingly, even to researchers armed with the latest in technology.

Was the loss of the Hunley the result of the torpedo's detonation? An unsecured hatch? Or perhaps a lucky enemy shot that blasted a hole in the Confederate vessel's viewing port?

And why were the crew's remarkably preserved remains found at their stations, rather than jammed together near an escape hatch?

These and other questions continue to enthrall scientists and historians as the sesquicentennial is observed with tours and events in the Charleston area.

There is hope that some additional clues may emerge soon.

The Hunley Project, a consortium of researchers, scientists and state and federal agencies, this year begins a conservation phase that might add an important piece to the puzzle of what happened to the submarine.

A chemical bath will peel away the final layer of sediment that covers the exterior of the well-constructed hull and the Hunley's interior.