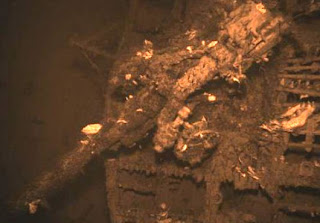 A team of New York-based explorers took Helen Cashell Baldwin out in their research vessel off the coast of Key West, Florida last summer.

More than 600 feet below lay the wreckage of a World War II submarine — the final resting place of her father and 41 fellow sailors.

Baldwin, 78, threw a rose into the water and whispered her father’s name.

She did the same for each of the men who died when the submarine R-12 sank during a training mission on June 12, 1943, one of 52 lost during the war.

Two years after Tim Taylor and Christine Dennison put up $750,000 of their own money to find and document the R-12, and 70 years after the vessel sank, the two explorers are tapping crowd-funding site Kickstarter to finish a documentary about the discovery.

“It gave me chills, absolutely,” said Baldwin. “The fact that Tim could show us the actual submarine on his sonar, it was so freeing. We were talking and we were grieving, which was something my mom had never done.”

The R-12 was the oldest submarine used in WWII, built in 1918 and recommissioned in 1940 as a training vessel. Bob England, 90, was on the Key West Naval base the day the R-12 didn’t return.

“I saw the ship off that morning, but I was fueling so I was the only person from the crew not aboard,” England said in a phone interview from Inverness, Florida.

“That afternoon we were notified by the operations officer that the R-12 was overdue.

Then they told us they were looking for survivors.”