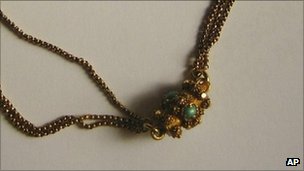 A necklace that belonged to a passenger on the Titanic has been stolen from an exhibition in Denmark.

The gold-plated necklace was part of a temporary display of artefacts from the ill-fated ocean liner at Copenhagen's Tivoli park.

Police are investigating and Tivoli has offered a reward of 1,000 euros (£870) for its recovery.

It is believed the necklace belonged to first-class US passenger Eleanor Widener, who survived the 1912 sinking.

More than 1,500 passengers and crew died when the Titanic foundered in the North Atlantic after striking an iceberg on its maiden voyage.

"The showcase has not been broken into and the alarm didn't go off," Tivoli spokesman Torben Planks said.

"It is pretty embarrassing," he added.

Exhibition owner Luis Ferreiro said the necklace was insured for 14,000 euros but was so well known he doubted it could be sold on.

"It was very important piece. The artefacts tell stories about the people aboard," he told the Associated Press.

The Widener family were among the richest families on board the Titanic.

The travelling exhibition includes china, ships' fittings and other items recovered from the famous shipwreck.