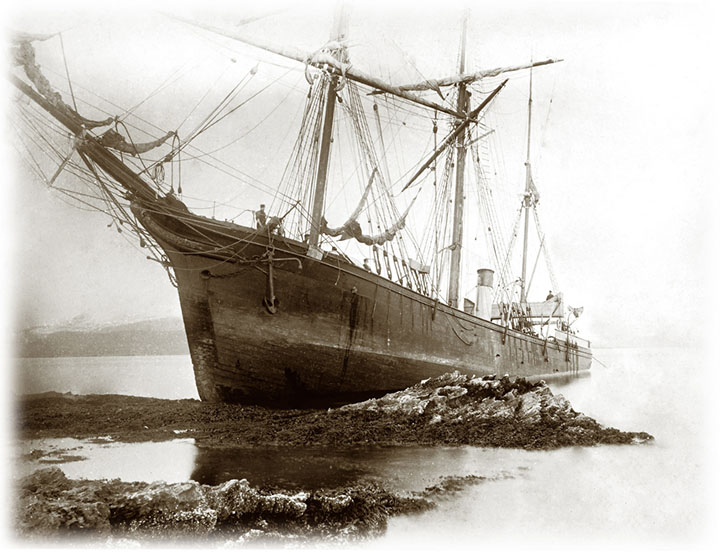 From The Siberian Times

The name of Benjamin (Ben) Leigh Smith may not seem too familiar among Arctic explorers, but it should be.

The intrepid explorer born into a radical English family named the cape where his vessel sank after being trapped between two giant icebergs after his famous relative Florence Nightingale, known as 'The Lady with the Lamp' for tending the wounded in the Crimean War, an English social reformer and statistician who is seen in her country as the founder of modern nursing.

On his fateful voyage which culminated in the fateful sinking of his elegant steam yacht, the Eira, a remarkable photograph records a meeting at sea with two other ships from Peterhead in Scotland, the Hope and the Eclipse.

Leigh Smith invited on board the Eira the captains of both these ships and an historic picture records the occasion.

After the Eira sank, the crew built a shelter - Flora's Cottage, made from driftwood, rocks and ship masts - and somehow survived six months of total darkness, intense cold, and bone cracking gales in the Arctic winter thanks in no small measure to ship's dog Bob.

They were rescued the next summer after a perilous journey in storm force winds in the Eira's four lifeboats - with sails made of table cloths purloined from the sunken vessel -  to the waters off Novaya Zemlya where they were found by an expedition sent from England to rescue them.

For years researchers have sought to locate the wreck of the Eira, which had been specially built as an Arctic vessel for Leigh Smith.

It is now revealed that in August 2017, the expedition 'The Open Ocean: Archipelagos of the Arctic' during a survey of the seabed at Cape Flora discovered 'an object' the size of the Eira.