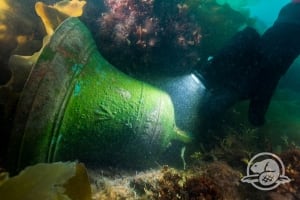 Divers beneath the Arctic sea ice offered a live video tour at the wreck of the Franklin Expedition's HMS Erebus today.

Holes had been cut through the ice, which is now about two metres deep, to give Royal Canadian Navy divers and Parks Canada underwater archeologists a chance to continue exploration of the 19th-century wreck discovered late last summer in the Queen Maud Gulf off Nunavut.

Park Canada had initially said a pre-recorded video would be released at the Royal Ontario Museum in Toronto, providing an "up-close-and-personal" look at the ship that was one half of the ill-fated polar expedition led by Sir John Franklin in the 1840s.

But instead, at the Toronto event on Thursday afternoon, divers Marc-Andre Bernier and Ryan Harris, with a live video connection, provided the show. Viewers were able to see the vivid remains of Erebus and, with several technical interruptions, hear descriptions by the underwater crew.

The divers were also able to answer questions from students gathered at the ROM.

A video of the live event was released later.

The earlier video, along with photos released Wednesday, were scheduled to provide the first public look at a complex operation that is being done in conjunction with Joint Task Force (North)'s annual high Arctic sovereignty operation, Nunalivut.