Mystery of the "Beeswax Wreck" in Nehalem Bay 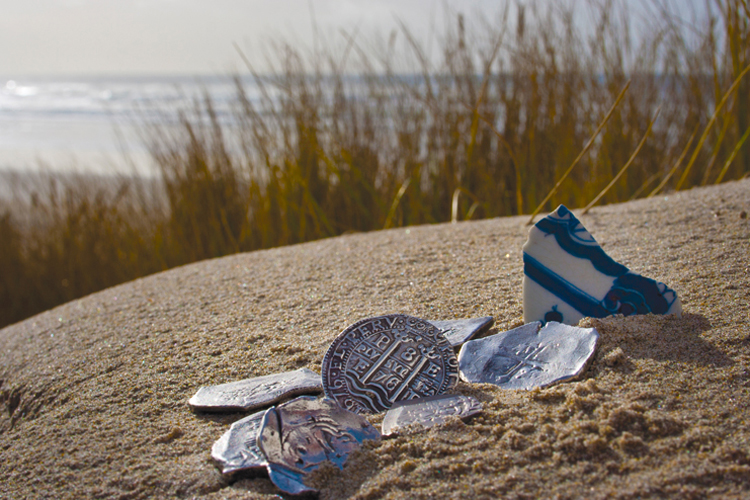 Beeswax, porcelain and teak timbers, among other artifacts, have been found along Manzanita's beaches and the adjacent Nehalem Spit and Bay.

Ahh, shipwreck treasure... perhaps no other subject is quite as magical, and I grew up with that magic.

I was born just six miles from the wreck of Gold Rush paddle steamer Brother Jonathan, which took $500,000 in gold to the bottom just off Crescent City, California in 1865, and grew up listening to Dad spin tales of lost gold mines, sunken ships and, with the fire glowing bright and a glass of sweet wine in his hand, the fables of treasures to satiate desire.

When I landed in Key Largo, Florida as a teen, I jumped in the water and never looked back.

Had I been asked that question in the Keys, I would have said, "No." But when I moved back to the Oregon coast in 2010, it wasn't long before I heard the intriguing story of the "beeswax wreck" reputed to lie somewhere in the surf beyond the sleepy seaside town of Manzanita, just south of Cannon Beach.

These stories told of large blocks of beeswax (some weighing 175 lbs.) with strange markings on them, teak wood timbers and delicate Chinese porcelains which had been washing up on the beach for the last several hundred years. My first thought ? A Manila galleon !

These Spanish trade ships sailed from Acapulco, New Spain (present day Mexico) to Manila, the Spanish capital of the Philippines, for 250 years, delivering silver from New World mines in exchange for the fabled silks and spices of the East.