A Jamestown shipwreck 400 years ago 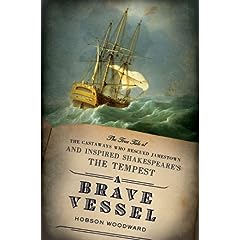 News of shipwrecks reached London regularly during the lifetime of William Shakespeare.

The frequency of travel by water and the fragility of wooden sailing vessels made disaster at sea a relatively common occurrence.

Thus it is all the more striking that the playwright chose one particular wreck—the loss of a Jamestown ship on uninhabited Bermuda four centuries ago this month—as an inspiration for his ethereal Tempest.

The Sea Venture was voyaging from London to the two-year-old colony on the Virginia coast in the summer of 1609 when it encountered an intense hurricane.

After four days of punishing violence the ship came to rest on a Bermuda reef. All 153 people aboard survived to be remembered as the first to occupy the mid-Atlantic isle.

A year later when some of them returned home and told their story, Shakespeare ensured they would also make literary history as a source for his last solo play.