Pavlopetri: A window on to Bronze Age suburban life 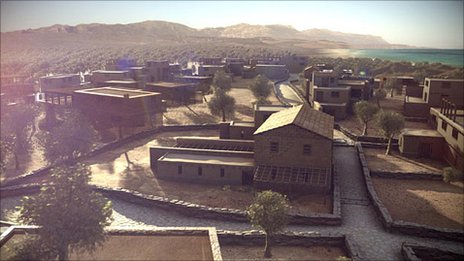 Semi-detached houses with gardens, clothes drying in the courtyards, walls and well-made streets - Pavlopetri epitomises the suburban way of life. Except that it's a Bronze Age port, submerged for millennia off the south-east coast of Greece.

This summer it became the first underwater city to be fully digitally mapped and recorded in three dimensions, and then brought back to life with computer graphics.

The result shows how much it has in common with port cities of today - Liverpool, London, New York, San Francisco, Tokyo or Shanghai - despite the fact that its heyday was 4,000 years ago.

Covering an area of about eight football pitches, Pavlopetri appears as a series of large areas of stones indicating building complexes, among which a network of walls can be traced.

It is a city of well-built roads lined by detached and semi-detached two-storey houses. There are larger apparently public buildings and evidence of a complex water management system involving channels and guttering.

The city was divided into pleasant courtyards and open areas where people cultivated gardens, ground grain, dried clothes and chatted with their neighbours.

Dotted in between the buildings and sometimes built into the walls themselves there are stone-lined graves. These contrast with an organised cemetery just outside the city.

There is much about Pavlopetri that parallels our own towns and cities, and our own suburban way of life - people living side by side along planned-out streets.