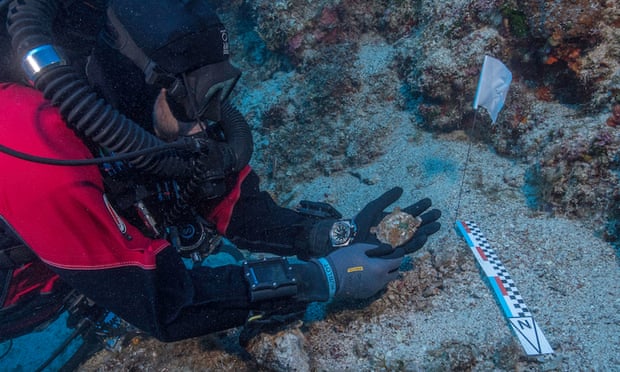 By Peter B. Campbell - The Guardian

The shipwreck at Antikythera, Greece, continues to reveal its secrets and surprise archaeologists. As reported last week, recent excavations on the 1st century BC shipwreck have revealed statue fragments, bronze ornamentation, and wooden remains from the ship’s hull.

The finds are sensational, but the artifacts and the project have broader importance. Among the finds was the bronze arm of a statue, which may be the most significant find.

When the shipwreck was first found and excavated in 1900-1901, a number of bronze and marble statues were recovered. However, the arm is the first piece that has been found recently and it might point to more intact statuary in the area.

The arm is one of several limb fragments that do not have corresponding bodies. The Antikythera team hypotheses those statues could be in the vicinity of the undisturbed deposit that they excavated this year.

New bronze statues would be a sensational discovery. Bronze statues are among the rarest artifacts to survive from antiquity; however, ancient authors tell us that they were quite common.

Pausanias wrote a Roman travel guide of Greece and he describes the many bronzes statues filling cities like Athens. In Greek Bronze Statuary Professor Carol Mattusch writes, “all ancient literary accounts indicate that freestanding bronze statuary was the primary mode of artistic expression in Classical Greece.”

Ancient cities like Athens and Rome were filled with bronze sculptures, with bronze being preferred over marble.