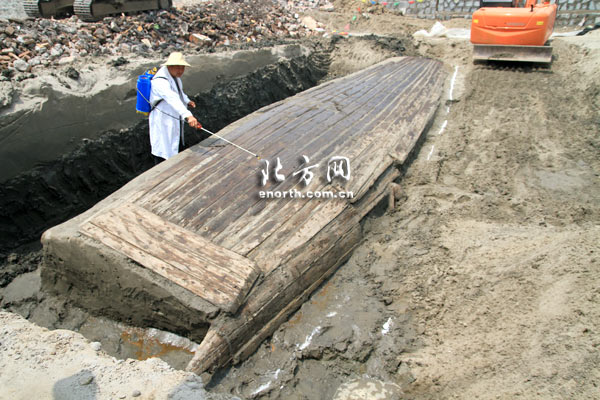 Archaeologists in Tianjin announced on Monday they have excavated two shipwrecks that were buried for centuries under the Grand Canal, the longest artificial waterway in the world.

More than 600 artifacts have been recovered from the sunken vessels, which date back to the Ming Dynasty (1368-1644), according to the Tianjin Cultural Heritage Protection Center.

The wrecks first came to light in April, after workers dredged a section of the canal in the northern municipality of Tianjin, said Mei Pengyun, director of the center.

After the month-long excavation, experts revealed fragments of one ship and the well-preserved structure of another. A large numbers of bricks, ceramic pieces, bone and wooden wares were found scattered around the site, Mei added.

The second ship, measuring 13 meters long, is believed to have been a barge that once plied the 1,776-km canal, which stretches through several provinces in north and east China.

The discovery will provide precious insights into the development of ancient Chinese ships and China's water transport history, as well as benefit China's application to secure World Heritage status for the Grand Canal.

The Beijing-Hangzhou Grand Canal was once a major waterway linking Beijing and resource-rich Hangzhou, capital of east China's Zhejiang Province.

The oldest sections of the canal were built 2,500 years ago, and they were linked together in the Sui Dynasty (581-618). Part of the canal is still in use today.