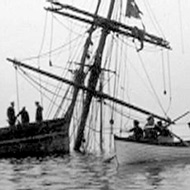 The Dry Tortugas is a cluster of seven islands 112 kilometers west of Key West, Florida.

Surrounded by coral reefs and sandy shoals, this island chain is the graveyard of dozens of sailing ships and their crews.

One modern day treasure hunter mounted a search for a Spanish galleon laden with riches that went down near the islands in a hurricane more than three centuries ago.

After 16 years of searching, Mel Fisher's persistence paid off with the discovery of a treasure worth nearly half a billion dollars.

Spanish explorer Juan Ponce de Leon is credited with discovering the Dry Tortugas islands in 1513. He named the islands for the many sea turtles living on these arid landmasses.

Jack, a tour guide at the Dry Tortugas National Park says these waters have been treacherous for ships.

Stories of sunken gold on these wrecks have attracted treasure hunters for years. One of the most famous is Mel Fisher, a tenacious salvager who realized his dream of finding riches beneath the waves.

Fisher has since passed away, but his grandson Sean carried on the family business.