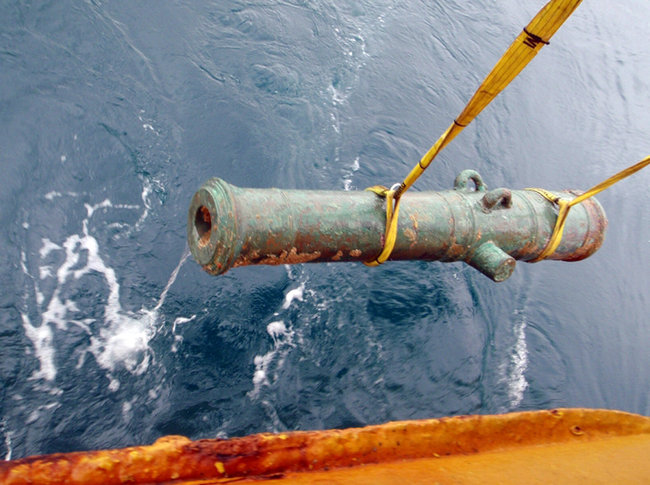 A deal was struck on Wednesday to save what could prove to be one of the richest treasure wrecks of all time.

Four years ago, in the depths of the English Channel, explorers found the remains of a legendary British warship that sank in 1744 and lost more than 1,000 men.

But intruders disturbed the site, dragging and damaging some of the 44 bronze cannons visible on the sandy bottom and hauling one of them away.

The wreck’s fate became a topic of public debate in Britain, and not just because of the nation’s efforts to preserve its maritime heritage: documents suggested that the warship, the H.M.S. Victory, had carried a secret cargo of gold coins weighing about four tons.

If melted down, the gold might be worth $160 million. But if sold for their historic value, the coins might fetch $1 billion.

On Wednesday, the discoverers of the wreck said they had signed an agreement in which they would document and recover the artifacts, ending a long period of uncertainty. They praised the accord as an innovative new way for nations to save historic wrecks.

“We’ve come up with the model that everybody’s been looking for,” said Gregory P. Stemm, head of the discovery team and chief executive of Odyssey Marine Exploration of Tampa, Fla., a publicly traded company that specializes in deep-sea exploration and recovery.

Odyssey will recover the warship’s remains for the Maritime Heritage Foundation, a British charity that received the title to the wreck from British authorities. Its chairman, Lord Lingfield, the Conservative peer formerly known as Sir Robert Balchin, said teaming up with Odyssey was aimed at preserving an important aspect of British history.

“Therefore, we have planned an archaeological survey that will record the site before it deteriorates further,” he said.

Lord Lingfield is a relative of Adm. Sir John Balchin, who commanded the Victory when it went down in a gale. The agreement between the foundation and Odyssey is to be formally announced on Thursday.

The Victory was armed with as many as 110 bronze cannons, making it one of the deadliest vessels of the age. The largest cannon weighed four tons and could fire cannonballs of 42 pounds, making it the most powerful gun then used in naval warfare.

In July 1744, the flagship Victory and a fleet of warships were sent to rescue a Mediterranean convoy blockaded by a French fleet at Lisbon. After chasing the French away, the Victory escorted the convoy as far as Gibraltar and then headed home.

A raging storm hit the British fleet shortly after it entered the English Channel, and on Oct. 5, 1744, somewhere off the Channel Islands, the Victory went down with all hands.

A month after the loss, a Dutch newspaper reported that the Victory had been carrying from Lisbon £400,000 destined for Dutch merchants. Odyssey has extensively researched the reliability of that report and concluded that the claimed shipment was most likely genuine and consisted of nearly four tons of gold coins.