HMS Victory 'set to be recovered' from seabed 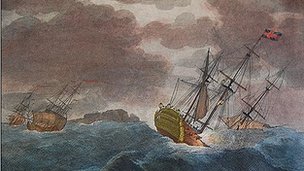 The remains of a 300-year-old warship are to be raised from the sea bed, according to reports.

The wreck of HMS Victory, a predecessor of Nelson's famous flagship, was found near the Channel Islands in 2008. The British warship, which went down in a storm in 1744 killing more than 1,000 sailors, could contain gold coins worth an estimated £500m.

The Sunday Times says the Maritime Heritage Foundation is set to manage the wreck's raising. It also reports that the charity will employ Odyssey Marine Exploration to carry out the recovery.

The American company found the ship four years ago, with the ship's identity confirmed by a bronze cannon.

The guns and other reclaimed artefacts will be displayed in British museums, however under the laws of salvage, Odyssey is likely to receive the bulk of any treasure found, according to the newspaper.

A Ministry of Defence spokeswoman said: "Efforts to protect key parts of British Naval history such as the wreck of HMS Victory 1744 are very welcome and we hope to make an announcement shortly."

The chairman of the foundation, Lord Lingfield, is a relative of Admiral Sir John Balchin, who was onboard the warship when it sank. The Tory peer, formerly known as Sir Robert Balchin, told the newspaper that he would not profit from the ship's cargo.

He added: "We will have the satisfaction of solving a great maritime mystery that has been part of my family history since the 18th Century."