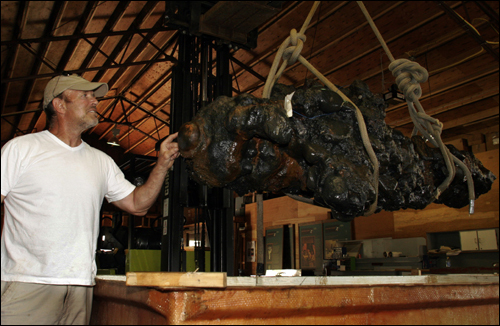 Among the City By The Sea’s greatest assets are its colonial and maritime heritage. Now, one of the world’s most notable shipwreck hunters hopes to move his Cape Cod museum to Newport, saying the city could be an ideal fit for a museum, research and conservation center.

Provincetown resident Barry Clifford, who found the wreck of Black Sam Bellamy’s pirate ship Whydah under 20 feet of sand off Wellfleet, Mass. 25 years ago, is considering moving his Provincetown museum and a preservation lab he runs in Brewster, Mass. to Newport.

To Mr. Clifford, who is still excavating the 1717 wreck of the Whydah and is also searching for wrecks from Madagascar to Haiti, Newport could be perfect.

So far, Mr. Clifford has had discussions with Newport County Chamber of Commerce Executive Director Keith Stokes and other Newport officials and property owners. Nothing — location among them — is set in stone, he said, and discussions over the possible move have just begun.

But for Mr. Stokes, the fascinating story of the Whydah, a former slave ship captured by Bellamy that sunk with a loss of 144 lives, resonates and is worth developing.

“On a personal level, I think it’s a great opportunity,” Mr. Stokes said Monday. “My sense is that heritage and cultural tourism is a major opportunity for Newport.

The main thing about Newport is that we have authentic historical sites, materials and stories. Being able to present the history of piracy, the colonial slave trade, through this is a major opportunity. I’m excited about it.”