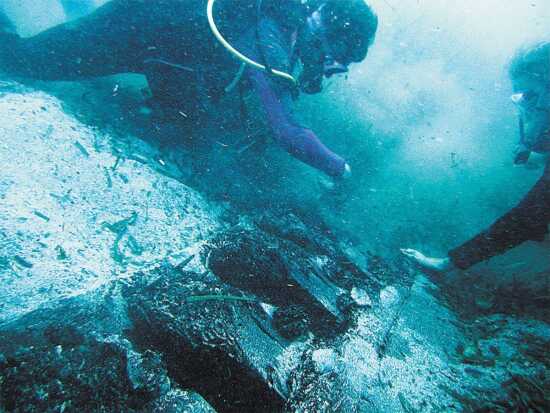 They were off to a rough start. The July day broke rainy and cold. And the boat's battery had died overnight.

After a jump-start from an old van caused a lengthy delay, the boat's crew, including Southeast Missouri State University anthropology student Jennifer Rickard, was finally ready to go. Waves rocked the small boat as seven wet-suit clad divers loaded it with heavy oxygen tanks and equipment.

Rickard and the rest of the team finally took off from the coast of Menorca, a Spanish island in the Mediterranean Sea. It was not the ideal way to begin the divers' second-to-last day of underwater excavation. And it would get worse before it got better.

The divers made their way out to sea and began to survey a potential dig site. A rough patch of water caused the boat to lurch, sending a $400 piece of lighting equipment overboard.

"We're all just watching it in slow motion," said Rickard, a sophomore. After waiting over an hour for their instructor to resurface after retrieving the equipment, the group decided they must carry on.

"We had to proceed with the survey," she said. "We only had so much time and it was already cut short for our instructor after using an hour of oxygen."

Earlier research had indicated this was the place to be. Rickard's instructor waved them on to continue their search, and they swam over vast expanses of seaweed on the floor of the Mediterranean Sea. Then they spotted a telling anomaly.

"There was so much seaweed over such large areas," Rickard said. "To not see any in an area was a huge marker."

The divers dug hands and then arms into feet of dead seaweed until they felt something much harder than the vegetation. When they pulled their hands back, they noticed black markings on their gloves.

"I just started screaming into my regulator, which wastes oxygen really fast, but I was excited," Rickard said. "We were all really excited."

They had uncovered a small portion of a charred shipwreck, which initial tests have shown might date back to the 16th century, when many ancient battles for the control of Menorca's ports took place.