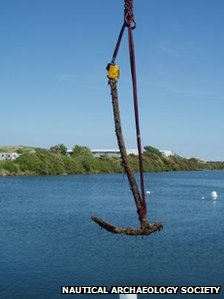 The wreck of an Elizabethan merchant ship is being transported to a new home in Leicestershire after being raised from a Portsmouth lake.

The so-called Gresham Ship has been 6m (20ft) underwater at Horsea Island Lake since being moved there after its discovery in the River Thames in 2003.

A large crane was used to lift the 400-year-old wreck for the journey to the Stoney Cove National Diving Centre.

Its destination is the National Diving Centre - a flooded quarry at Stoney Cove - where it will be used as an "underwater classroom" to train nautical archaeologists.

It is due to arrive in Leicestershire around lunchtime.

On Monday and Tuesday, a team of eight divers working for the Nautical Archaeology Society raised iron bars, the ship's anchor and 400-year-old pieces of timber, the largest of which is more than 8m (26ft) long and weighs 8 tonnes.