Researchers hope to have Griffon shipwreck answers within a year 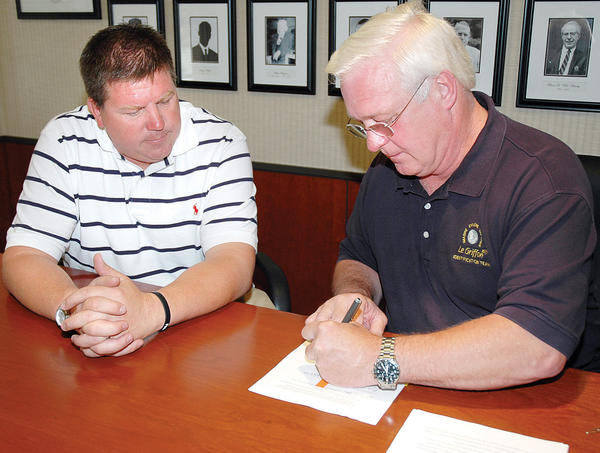 Within about the next year, researchers expect to know whether a shipwreck that lies in northern Lake Michigan is the remains of a ship belonging to one of the Great Lakes’ earliest European explorers.

That was the news delivered to the Charlevoix City Council Monday by Ken Vrana of the Center for Maritime and Underwater Resource Management, which has been working with part-time Charlevoix resident Steve Libert and his Great Lakes Exploration Group which found what could be the shipwreck site of the long-lost French vessel, the Giffon, in 2001.

Shortly after the discovery — which amounted to what appears to be a ship’s mast sticking out of the lake bottom — Libert became embroiled in a drawn out legal dispute with the State of Michigan and the Republic of France. But about two years ago, Libert inked a deal with the state and France allowing research at the site to continue.

Libert signed his portion of those documents at Charlevoix City Hall as a gesture to show his continued intentions to use Charlevoix as a base of operations for his explorations at the site.

Built by the legendary French explorer, Rene-Robert Cavalier, Sieur de La Salle, the Griffon was the first European vessel to sail the upper Great Lakes. It was intended to carry out lucrative fur-trading commerce which would support La Salle’s expedition in search of the mouth of the Mississippi.

According to Libert’s website, on Sept. 18, 1679, on its return maiden voyage, the Griffon, loaded with 6,000 pounds of furs, sailed out from present day Washington Harbor on Washington Island in northern Lake Michigan and was never seen again.

Vrana told the city council Monday that additional research that has been conducted to-date, including radio-carbon dating of a sample from the suspected ship’s mast, sonar, magnetic and other readings have not been conclusive, but they have been consistent with other research about the ship’s characteristics.

He also noted that none of the data collected has ruled the site out as possibly being the Griffon.