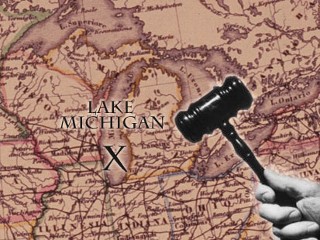 The gray waters of Upper Lake Michigan are deep, cold and treacherous.

And lately, they've been contentious.

A three-way court battle is brewing among an explorer who says he's found a 329-year-old shipwreck, the state of Michigan and the U.S. government.

Just as precarious as the weather that supposedly sank the Griffon in 1679, the legal battle seems to portend a perfect storm.

"This whole area has a lot of wrecks," said Capt. Carl Carlson.

"That's why they call it death's door.

There's been lives taken in the water everywhere."

The Griffon shipwreck is a legend where Wisconsin meets Michigan.

It's a 300-year-old mystery that Carlson and his diving partner, Steve Libert, are determined to solve.