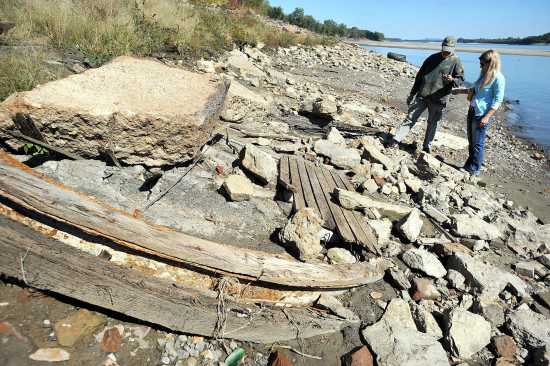 Low water on the Mississippi River has revealed a mystery on the banks near Cape Girardeau -- and two local educators along with a longtime shipwreck salvage diver are looking for help to solve it and preserve what they say is "a piece of our river heritage."

Amy Grammer and her husband, Russell, leaders of the local private school Prodigy Leadership Academy, were exploring the river's edge on a search for driftwood, pieces of pottery and pebbles for student projects on a September afternoon when something out of the ordinary caught Amy Grammer's eye.

"I almost walked right past it," she said. She didn't realize what she was seeing until she noticed a row of wooden tongue-in-groove planks and several joists protruding from the mud.

Low water after months of drought had exposed a section of a ship's stern. Knowing their find was something special, the Grammers immediately called on Randy Barnhouse, a longtime friend, retired teacher and salvage diver from Cape Girardeau.

Just one week before the discovery, Barnhouse visited the school to talk to students about shipwreck exploration.

For around 30 years, he has made repeated trips to Florida and the Caribbean for treasure salvage diving expeditions.

Barnhouse visits the wreck often to conduct measurements and document observations of the ship.

Its location, per request of its discoverers, needs to be kept a secret so that the site can remain undisturbed. Around 30 feet of the ship's length is visible in addition to the stern.

A large iron cleat shows near the riverbank and a hatch is blocked by a large section of cement and other debris. The ship's age is unknown. Barnhouse said he believes the ship may have been built when shipbuilders were switching from wood to metal.

The ship's hull appears to be made from iron, but a wooden casing surrounds it. Decking is also wooden.