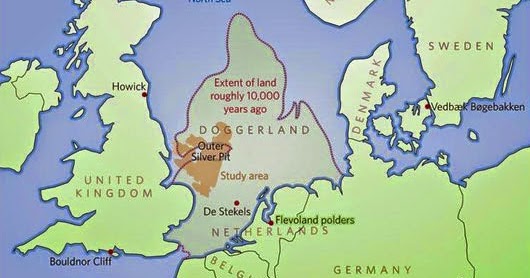 Oil company divers have discovered 'Britain's Atlantis,' an underwater world which was swallowed by the North Sea between 18,000 and 5,500 BCE. Working with University of St. Andrews science teams, divers found remains of a huge area of land that stretched from Scotland to Denmark and slowly submerged by water.

The 'drowned world' is said to have been the 'real heartland' of Europe, housing tens of thousands of people in an area that stretched from Northern Scotland across to Denmark and down the English Channel as far as the Channel Islands.

Once roamed by mammoths, Doggerland was hit by ‘a devastating tsunami', the researchers say.

“The name was coined for Dogger Bank, but it applies to any of several periods when the North Sea was land,” said Richard Bates of the University of St. Andrews.

“Around 20,000 years ago, there was a 'maximum' - although part of this area would have been covered with ice. When the ice melted, more land was revealed - but the sea level also rose.

“Through a lot of new data from oil and gas companies, we’re able to give form to the landscape - and make sense of the mammoths found out there, and the reindeer. We’re able to understand the types of people who were there.

“People seem to think rising sea levels are a new thing - but it’s a cycle of Earht history that has happened many many times.” Bones found by North Sea fishermen had prompted speculations about the existence of the lost land, but the there were no clues as to how it looked like.

“We have now been able to model its flora and fauna, build up a picture of the ancient people that lived there and begin to understand some of the dramatic events that subsequently changed the land, including the sea rising and a devastating tsunami,” Bates explained.

The St. Andrews, Dundee and Aberdeen universities have now displayed the results of their 15-year-project on the lost land in an exhibition in London. The show will display artifacts recovered from the seabed at the Royal Society Summer Science Exhibition until July 8.

Visitors can see an interactive video showing them how the land might have looked with hills and valleys, large swamps and lakes with major rivers dissecting a convoluted coastline.“There is actually very little evidence left because much of it has eroded underwater; it's like trying to find just part of a needle within a haystack,” said Dr. Bates.

“What we have found though is a remarkable amount of evidence and we are now able to pinpoint the best places to find preserved signs of life.”