Whos, whats, wheres of the Whydah 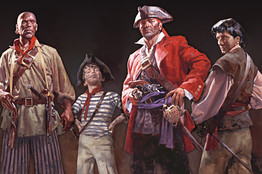 A small band of pirates operating off the coast of Somalia garnered headlines recently. But if you want to learn about life when pirates dominated both the seas and the news, then I'd suggest a visit to the Field Museum's "Real Pirates" (here through Oct. 25).

The exhibit tells the somewhat familiar story of the Golden Age of Piracy, circa 1650-1720, when rowdy bands of men (and sometimes women) sailed from port to port, wantonly looting, lusting, and -- ultimately -- losing the small fortunes they sometimes managed to amass.

What makes the show engaging and worthwhile is the fact that other stories are told within this collection of artifacts, dioramas and interpretive panels.

The centerpiece of the "Real Pirates" story is the Whydah, a ship that engaged in piracy for such a short time that when it went down off Cape Cod in April 1717 it still had most of its treasure on board.

That loot is, according to the curators, the only documented pirate treasure ever found. The Whydah was originally built for the lucrative slave trade, a story that's told here too.