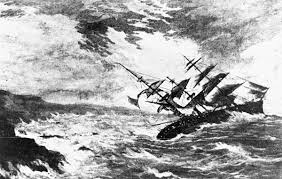 Underwater video footage of one of Wales' most notable shipwrecks will be shown for the first time next month.

The steam clipper Royal Charter was smashed on rocks off Moelfre, Anglesey, by a force 12 hurricane - with the loss of least 459 passengers and crew on 26 October 1859.

The ship was returning from Melbourne on its way to Liverpool, laden with gold.

Chester Grosvenor Museum will show the film on 25 October.

Diver Chris Holden, treasurer of the British Sub-Aqua Club's Chester branch, will show the film as part of a lecture to mark the 152nd anniversary of the maritime tragedy.

Mr Holden and his wife Lesley, of Higher Kinnerton, Flintshire, wrote a book about the shipwreck, called Life and Death on The Royal Charter.

Mary Tetley, chief executive of the British Sub-Aqua Club, said: "Chris and Lesley have done a phenomenal job in researching the story of the Royal Charter and the lecture will give us a new and fascinating insight into this maritime catastrophe."

Along with the unseen footage, it will be the first opportunity for many to see artefacts from the wreck, which include a small model of the vessel's newly invented lifting propeller system, recovered from the wreck site less than 12 months ago.