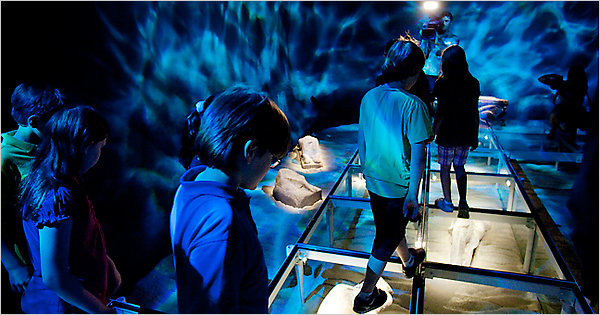 It may be best to dispel any illusions immediately. The only certain images we seem to have of the last queen of Egypt, Cleopatra VII, have no discernible resemblance to the painted faces of Elizabeth Taylor or Claudette Colbert or Sarah Bernhardt. Those visages can be contemplated with far more sensuous contentment than the Egyptian queen’s bulbous, knotty and eroded features stamped on gold coins from the first century B.C.

But by the time we see the cinematic, romanticized faces of Cleopatra from films and paintings in the final gallery of the new exhibition “Cleopatra: The Search for the Last Queen of Egypt,” opening Saturday at the Franklin Institute here, we are prepared to acknowledge the virtue of at least some idealization.

The wonder we feel is not at Cleopatra’s beauty (which Plutarch reports was “in itself not altogether incomparable”) but at the extraordinary cultural universe that preceded her and surrounded her before Egypt submitted to the Romans in 30 B.C. and Cleopatra — Egypt’s last pharaoh and the end of the Ptolemaic dynasty — committed suicide.

The exhibition is powerful. But that is not really because of Cleopatra; it is because a lost world is resurrected here. There are some 150 artifacts on display, and the vast majority were found buried in the silt and clay of the Bay of Aboukir, off the coast of Alexandria, Egypt. Since 1992 those waters have been explored by Franck Goddio and his European Institute of Underwater Archaeology.

Using a nuclear magnetic resonance magnetometer, Mr. Goddio mapped the geographic fault lines beneath the clouded waters and has brought to the surface a small fraction of what lies below.

He has identified the relics and ruins as remnants of the ancient cities of Canopus and Heracleion, submerged by tidal waves, earthquakes and wars; he has also discovered palaces and temples of the nearby eastern port of Alexandria, the city that the Macedonian conqueror Alexander the Great made his capital, and that Cleopatra imagined could rival Rome.

The first half of the exhibition shimmers in atmospheric blue light, the artifacts accompanied by videos of their excavation by red-suited divers maneuvering through opaque waters.