How fishermen are bringing lost secrets of UK waters to land 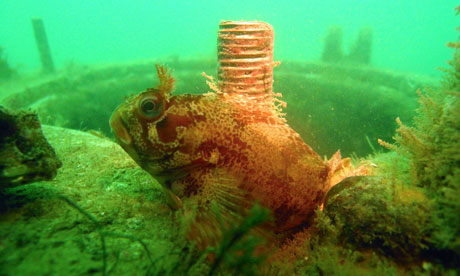 By Robin Mckie - The Guardian

Trawlerman Dennis Hunt was crossing Colwyn Bay in his boat in 1995 when its nets snagged on the seabed.

Unable to free them, Hunt contacted diver Keith Hurley, who swam 60ft down to the sea floor – and found that the nets were caught on a rusting submarine's conning tower.

Hunt and Hurley had found the Resurgam, one of Britain's first submarines, which sank in 1880. It was a key historical discovery but certainly not a first for fishermen.

Every day hundreds of items, ranging from Spitfire engines to ancient stone tools, are dragged up by fishing vessels while wreck sites are revealed after nets become snagged on sunken craft.

As fishing intensifies, more discoveries are being made this way, a process that threatens to run out of control. As a result, English Heritage will launch a pilot scheme this month that aims to keep in order the avalanche of historical finds now produced by our fishermen.

"There are about 46,000 recorded shipwrecks, crashed aircraft and sites of archaeological finds in English waters that we know of," said archaeologist Simon Davidson. "However, these recorded sites only make up about 10% of the total down there, we estimate."

In addition, it is reckoned that, in the second world war alone, 13,000 aircraft were lost in UK waters, including the plane that carried the American swing band leader Glenn Miller on a flight that disappeared, presumed lost in action, on 15 December 1944.

"This collection of lost ships and aircraft represents an enormous historical resource," said Davidson. "Certainly, given its size, it is not surprising so many items get dredged up by fishermen."

The pilot scheme will be in Sussex. About 400 fishing boats sail from its nine ports and every day about half of these craft dredge up a historical item.

Leaflets about the scheme, which will be administered with the help of Sussex Inshore Fisheries and Conservation Authority, will provide fishermen with the details of those to contact after a find is made and provide information about salvage rights. The scheme, if successful, will be spread throughout the country.