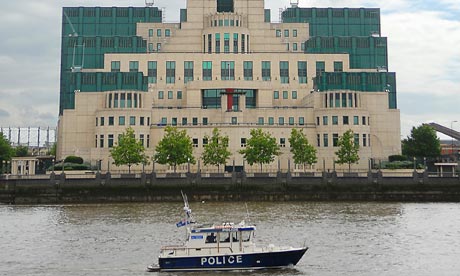 When MI6 set up home on the banks of the Thames one secret escaped its watchful eyes. The oldest wooden structure ever found on the river, timbers almost 7,000 years old, have been discovered buried in the silt below the windows of the security services' ziggurat headquarters at Vauxhall, south London.

The archaeologists who uncovered the six hefty timber piles had to explain to the security services what they were up to when armed police turned up after they were spotted pottering about on a foggy day in the mud, armed only with tripods, cameras and measuring equipment – not, as one spectator had apparently reported, shoulder-mounted rocket launchers.

"They accepted there wasn't much damage we could do with a tripod," said Gustave Milne, the archaeologist who leads the Thames Discovery programme that has been surveying the entire prehistoric foreshore, uncovering centuries of ancient wharves, fish traps, jetties and ship timbers.

The timbers, partly scoured bare by erosion of the river bed, the largest up to a third of a metre in diameter, were discovered in work during exceptionally low tides last February, but carbon dating work – revealed in the new edition of London Archaeologist journal – has only recently been completed, proving that the trees were felled between 4790 BC and 4490 BC.