Swanland shipwreck to be examined by robot submarine 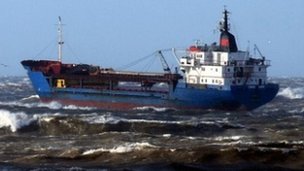 The Marine Accident Investigation Branch is to use a robot submarine to survey the wreck of a cargo vessel which sank off the north Wales coast.

Six Russian crewmen died when the Swanland sank carrying 3,000 tonnes of limestone during a storm in November. A surviving sailor said the hull broke after the vessel was struck by a "giant wave" off Lleyn.

An exclusion zone has been established 15 miles west of the peninsula whilst the survey work is carried out.

In December a BBC investigation found the ship had been at the centre of repeated safety concerns.

An analysis of safety inspection records for the Swanland revealed a high number of failings.

Members of the crew claimed the vessel was vulnerable in rough seas because of a history of unsafe loading. The ship's operator, Torbulk Limited, said it had been regularly inspected and any faults "promptly rectified".

Prince William co-piloted one of the helicopters involved in the rescue of two Russian crew members as the vessel was caught in a gale force 8 storm.

According to Vitaliy Karpenko, one of the two survivors from the all-Russian crew, the ship's hull suddenly cracked.

"It broke in half right across the middle. I saw it with my own eyes," he said. "We saw through the porthole that it was hopeless trying to save her.