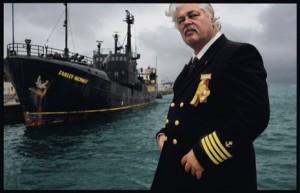 Notorious Sea Shepherd captain Paul Watson was arrested Saturday in Germany and is likely facing extradition to Costa Rica where he could be charged with attempted murder.

The charges, Sea Shepherd admits, stem from an alleged incident took place in Guatemalan waters in 2002 while filming Sharkwater, a documentary film meant to expose the shark-hunting industry and stars Watson as he confronts shark poachers in Guatemala and Costa Rica.

According to a release by the marine wildlife conservation society, Sea Shepherd encountered an illegal shark finning operation run by a Costa Rican ship called the Varadero and order them, under authorization by the “order of the Guatemalan authorities”, to cease activities and head back to port to be prosecuted.

While escorting the vessel back to port, the crew of the Varadero contacted the Guatemalan authorities and said that that the crew of Sea Shepherd actually tried to kill them.

Staying true to their roots, the Guatemalan authorities quickly switched sides and dispatched a gunboat to intercept the Sea Shepherd crew.

The Sea Shepherd retreated, fleeing into Costa Rican waters where they continued their assault on illegal shark finning groups.

But that’s not the end of the story.