Conquistador silver may not have sunk Spain's currency 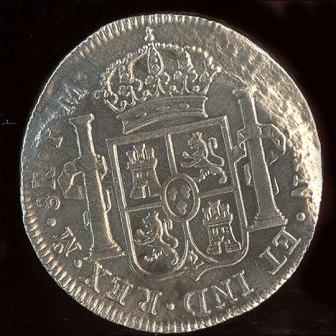 Between 1520 and 1650, Spain’s economy suffered crippling and unrelenting inflation in the so-called Price Revolution.

Most historians have attributed that inflation, in part, to the importation, starting in 1550, of silver from the Americas, which supposedly put much more currency into circulation in Spain.

But in a report out this week, a team of researchers argues that for more than a century the Spanish did not use this imported silver to make coins, suggesting that the amount of money circulating in Spain did not increase and could not have triggered the inflation.

Between the 16th and 18th centuries, the Spanish extracted as much as 300 tons of silver per year from mines in Peru and Mexico.

If the heavy bars managed to survive the hazards of the Atlantic, both natural and piratical, they could either be coined into pieces of eight or be traded with other countries to offset Spain's many costs, which at this time included financing wars in the Netherlands and importing porcelain and silk from China.

But did the Spanish actually use the imported silver to make coins ? To find out, archaeometrist Anne-Marie DeSaulty and colleagues at the University of Lyon in France used mass spectrometry to measure the ratios of several metal isotopes—atoms of the same element with different numbers of neutrons in their nuclei—in 91 old coins: 24 ancient coins from Greece and Rome, 23 medieval coins from around Europe, 25 coins minted in Spain from the 16th and 18th centuries under a succession of different kings, and 19 coins minted from Latin American silver.

The Latin American coins generally had a broader mix of different silver, lead, and copper isotopes than the European coins, likely because of the geologic complexity of the volcanic caves that hosted the New World’s most prolific silver mines, the researchers report online this week in the Proceedings of the National Academy of Sciences.

The ratio of the silver-109 isotope to silver-107 turned out to be much higher in New World silver than in the European coins.

More important to the debate over the Price Revolution, the researchers discovered that coins with dates and heads indicating that they were minted in Spain prior to the reign of Philip V (1700 to 1746) had an isotopic makeup similar to medieval European coins.