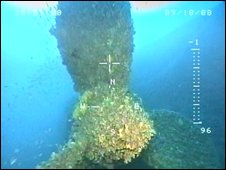 Forgotten by many and unheard of by most. Yet the sister-ship of the Titanic is starting to escape from the shadow of the iconic shipwreck.

HMHS Britannic was completed at Belfast's Harland and Wolff shipyard two years after Titanic was lost in 1912. But she in turn went to the bottom, the victim of enemy action in the First World War.

BBC News correspondent Mike McKimm joined a Greek scientific expedition and dived to the Britannic to bring back dramatic footage of one of the world's biggest wrecks.

And the expedition also set out to try to discover what sank the vessel. Was it a torpedo or a mine ?