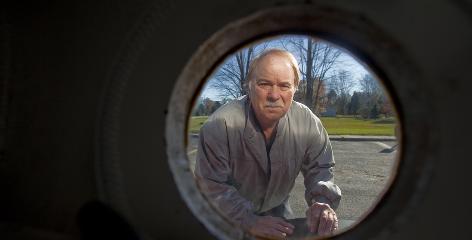 Great Lakes explorer Frederick Shannon retired from diving about five years ago because of declining health.

The 64-year-old former police officer, who lives near Flint, Mich., is best known for his explorations of the wreckage of the sunken freighter SS Edmund Fitzgerald. He spent about $75,000 to lease a two-man submarine to make seven dives into Lake Superior in July 1994.

Many family members of the 29 crewmembers lost when the ship sank on Nov. 10, 1975, were unhappy when he ventured to the wreck site. They were even more upset when he announced that a body could be seen and that he intended to release photos showing the discovery.

Shannon further angered many family members in 1995 when he sued to prevent the removal of the Fitzgerald's bell so it could be placed on display at the shipwreck museum in Whitefish Point in Michigan's Upper Peninsula. He lost the suit.

As the 35th anniversary of the Fitzgerald's sinking approaches Wednesday, Shannon says he now has a better appreciation for the pain felt by the crew's relatives.

"If removing the bell from the Fitzgerald brought solace to the families, I'm all for it," he says. "I think they needed a physical thing for closure, and what better than the heart of the ship, which was the bell."

The Edmund Fitzgerald's wreckage sits 530 feet below Lake Superior's surface. There are two large, intact sections at either end, but the middle was broken into pieces. The ship sank during a storm about 17 miles from Whitefish Point.

It's one of thousands of shipwrecks that dot the Great Lakes, but it's easily the most famous, thanks in large part to Gordon Lightfoot's 1976 ballad, The Wreck of the Edmund Fitzgerald.

It's not clear why the big ship sank as it traveled from Superior, Wis., on its way to Zug Island near Detroit with a load of taconite pellets, or iron ore.

Theories on the sinking's cause abound. The uncertainty even prompted Lightfoot to alter his lyrics slightly this year after watching a documentary on the accident that suggested a rogue wave was to blame. Lightfoot eliminated a reference to a hatchway failure and the suggestion of human error.